Well, it turned out Jake was not my biological father. When I sent in my samples I opted to get the results via email - funny how technology is laced throughout this story from conception to revelation. It was a Thursday and I couldn't sleep, so I got up and brought my laptop into bed. I tried to be quiet as my boyfriend slept soundly next to me.

The results were not due for another day or two, but when I opened gmail, there it was - "DNA Results." In the middle of the darkness, my heart literally spasmed - a feeling I only remember having once before when I watched my brother just miss getting hit by a car.
The feeling was panic I think, which was so unexpected. I mean, I had been researching, blogging and corresponding for a couple of years on this topic and had been coordinating with Jake nearly two weeks, why such sudden panic? Feelings came forward that I never new were there, it was like I had repressed so much trying not to upset my parents, keeping the secret, not telling my brother. I opened the results scanning feverishly......where does it say "it"? where is the yes and no? I actually read and read the marker results with no understanding of the answer. For a moment I thought to myself that this was a metaphor for my conception a pivotal moment, a meaningful event, reduced to technicalities, to tests and medical procedures. And then:
"With 99.9% accuracy the donor is NOT biologically related"
It was as if a shot had rung out and there is that odd silence when you wonder what damage has occurred or who was shot. I actually felt physically nauseous. I started to cry......so much crying about this all. It never ends.
The only way I can describe it was that it felt like someone had died. Jake was alive and well in Brooklyn, but he wasn't my biological father and that hope, that chance to truly know myself - evaporated. I'm even crying writing this. Aside for a love of narrative writing and literature, I'm not a very dramatic person so this crying, this constant emotion is so unlike me.
My boyfriend woke up and his eyes were squinting from the laptop glow. "What's up hun?"
"It's not him" I said. He knew, he hugged me. I just cried and cried and cried.
I remember stories my mom told about finding out she and my dad could not have kids, how she cried herself to sleep, how she would breakdown when she saw children and how terrible it was to want something so very badly but be unable to have it. How the feeling just ate her up in side, consumed her.
She doesn't realize, but I understand. It is that very same carnal ache, that heart-breaking urge to have something so out of reach but so intimately linked to who you are that defines the life of a donor offspring. Sometimes I want to scream from the rooftops -
"where are you?" just let me see this person, understand myself, know that half of me exists somewhere outside of my imagination but alas - unlike my mother a sperm bank offers no resolution for this despair, quite the contrary - the sperm bank is where this mess all started. 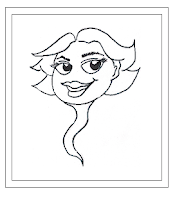